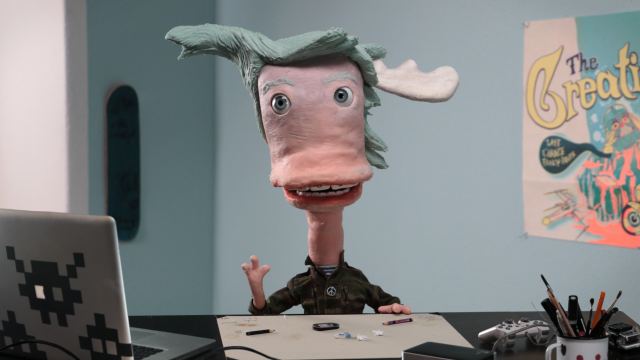 It made me so happy. I wish I could have been there. I love people who are open minded and ready to see with their heart. And I love cinema. As most of the people there love movies too.

– On the WILDsound experience and having her short film played at the festival.

Watch the Audience Feedback Video of her Short:

Laura: I was writing a treatment about a Teen-girl, and found my self talking about my youth in the 80ies a lot. So I thought it would be nice to find out what is going on these days with the Teens. Are there the universal questions about puberty everybody knows or has socila media changed it all.

Laura: Due to my pregnancy it took 3 years. I produced the film while my baby was having his siesta. (After this, I can do anything…)

Matthew: Talk about your interviews and then animating them. Have your subjects watched this film? If so, what has been their reactions watching their animation self?

Laura: We had three teachers in schools around Germany (you can hear the different dialects in the interviews) who were willing to trust us and participate. So I think thats why the Teens were really relaxed and trusting, they all were great teachers. The questions were about their lives, parents, friends, school, changing etc. We were amazed how cool the teens were.

I had six really talented and sensitive animators who got the audio track from „their“ Teen, and first we developed the character related to their interviews. We had only audio data from them. We also needed to save some time and made decisions about what would be important to animate and see. Focussing on hands, facial animation and lyp-sync. My job was also as an Art-Director keep everything visually togehter eventhough we had different techniques and styles. Including the backgrounds, colors etc. In all this I tried to give the artists as much freedom as possible to animate and make the Aliens alive.

I had contact afterwards with the teachers from these classes and reaction was all positive.

Laura: Bringin everything together, all the peaces, guide everything in one direction and trust my vision. It was quite late in the process that I knew it was working. So till then it was this burden of responsibility, I had a great team, if it wouldn work, it would be all on me.

Matthew: What are you really trying to say in this film?

Laura: Lovingly show how clever and self-reliant these Teenagers are, and have a gaze of a time in life everybody can relate to, the changes, brokeness, reluctance, overlap, freedom etc.

Laura: Yes, a new short film. Im in an process of writing it with my screenwriter. So exiting….

– FULL FEEDBACK on your film from the audience. Garner an audience feedback video on your film.

One thought on “Interview with Animation Director Laura Lehmus (Alienation)”