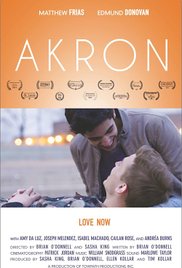 After the gay lifestyle gained acceptance around the world, gay films appear to have exhausted all possible subjects. Issues such as coming out, sex change, gay marriage, teen love, transgender identity, gay bashing, prejudice, gay rights have all been covered in one gay film after another. Filmmakers with gay themed films have to resort to used subjects with a new twist or a new look to succeed. AKRON, a teen mid-western gay love story does just that.

“You don’t choose who you fall in love with?” Benny challenges his father during a confrontation in one of the film’s key scenes. It is a valid question and one that does not have a single answer. The film poses one big magic question: “Can love conquer all?” And the film, as…