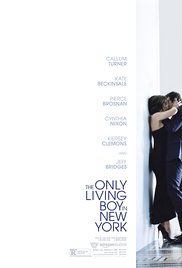 Adrift in New York City, a recent college graduate’s life is upended by his father’s mistress.

It has been 5 years since the announcement of the making of this movie and its completion after many delays and re-casting. Surprisingly, THE ONLY LIVING BOY IN NEW YORK turns out not that bad, but it is a far cry from the director’s first and excellent debut, THE (500) DAYS OF SUMMER.

The lead young actor, Callum Turner of THE ONLY LIVING BIY IN NEW YORK appears to be a clone of Joseph-Gordon Levitt in SUMMER, not only in looks but in certain mannerisms. Turner is not bad, charming, while portraying both the strength of a budding writer and a vulnerable player in the artistic world…