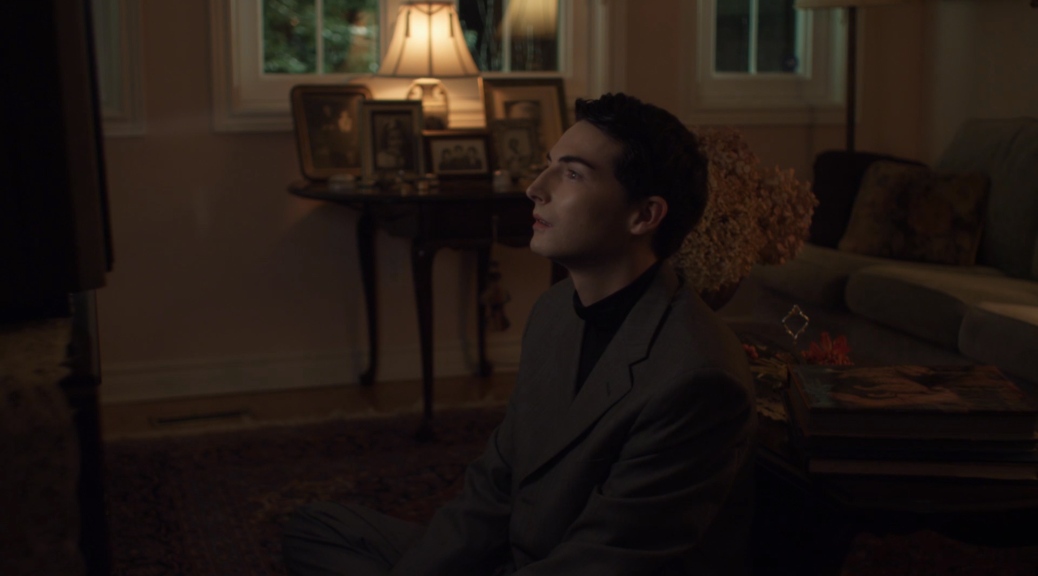 Watching the Toronto audience discuss My Buddy was a first for me, and admittedly, a little bizarre. I’ve never had my work discussed and analyzed by strangers in a public setting. It was exciting to see that many of the themes I wanted to explore were understood, appreciated, and debated over by the audience.

Mark’s film “MY BUDDY” was the awarded Best Film at the WILDsound February 2015 film festival.

WATCH the Audience FEEDBACK Video from the Festival:

Mark: The night I saw the Wachowskis’ Cloud Atlas (at the Carlton Cinema, ironically enough), I left the theater feeling incredibly inspired and desperate to create something. I had heard the song ‘My Buddy’ by the Alvino Rey Orchestra many times and had it in my Rolodex of ideas to base a film on. So I got home, and began drafting the plot and themes I wanted to explore, using my own grandparents as inspiration for Manny.

Mark: My Buddy was conceived of in February 2013. I worked on a couple drafts of the screenplay and then didn’t touch it for a few months. Then I pitched the film to the executive crew that summer and we got the green light from our school, Ryerson University, to produce it in September. Production took place in December and the film was finally finished in April 2014.

Mark: When I first dreamed up the idea for My Buddy I didn’t think I’d be able to produce it anytime soon. I figured I would need a lot of special effects for Win and that it’d be impossible to get an actor who could play the part convincingly. I finally finessed the idea enough to make it realistically producible on a limited budget. If it were not for my grandparents letting us take over their house for a week, Ryerson’s resources and the generous donation of time from our cast and crew (many of whom were toiling outside in the freezing cold rigging lights), we could not have produced My Buddy.

Matthew: In the moderation, we chatted with your actors. How was your personal experience working with them?

Mark: Vince Carlin and Ryan Anning are two of the easiest, nicest, and most patient actors a new director could work with. Watching them develop their characters and fall effortlessly into their roles over the course of the shoot was an absolute pleasure.

Mark: Probably The Lion King. My older brother wanted to watch it weekly (daily?) when we were kids. It’s still one of my favourite movies.

Mark: My first music video for Canadian band Parallels will be coming out later this year. I’m currently interning at two LA production companies in story development and hope to finish my first two feature film scripts by the end of the year.

Submit your Short Film to the Festival:
http://www.wildsound.ca/submityourfilm.html

The experience at WILDsound is always a great one! The feedback videos are a great tool to study and learn from and actually sitting in the audience during the screening gives alot of great perspective. Our upcoming short HEIR is Co-Produced by RED SNEAKERS MEDIA, a great Toronto Film team we had the pleasure of meeting at a Wild Sound event during the Festival run of our previous short WORM. I’ll always remember and credit WILDsound for that opportunity to meet new collaborators!

Watch the Audience FEEDBACK Video from the festival for FAMILIAR:

Matthew: Your short film played at our festival in 2013. How has it done since it screened? Has it played at more festivals? Distribution deal? Can be seen online?

Richard: FAMILIAR has played at over 50 Film Festivals world wide and continues to screen to this day. The amount of Festival selections and reviews the film has had is something we are very proud of. FAMILIAR was a project we had alot of confidence in so we look to have it screened and reviewed everywhere and by anybody interested in checking it out! To date Familiar has been hosted by FearNet where it had been awarded a STAFF PICK and GORIEST SHORT and currently FAMILIAR is in the process of being made available on ITUNES. The film being made available on ITUNES will hopefully make it that much more available to new audiences to find it and us!

Richard: FAMILIAR was really motivated by my desire to explore the themes of my previous short film WORM but through the prism of horror. WORM explores the hidden dangers of frustrated ambition and creativity through the use of an ID like inner monolog which dominates a High School English teacher. The short is a drama which flirts with the idea of horror and violence but ultimately prefers to explore those themes in verbal ways, I wanted to see if I could scare and or upset an audience with words only. The experiment was fun and in my mind a successful one, so much so that I have written a feature length version of that short film. After WORM I was thinking about what the inner monolog is, what the ID is, what desire is and those questions led me to FAMILIAR, a film which questions if our deepest desires and darkest thoughts are ours alone or originate elsewhere. How can something which is apparently ourselves work against us and motivate us to harm our selves and the ones we love? Surely this desire can’t be a part of us if it is self destructive? These questions and some fun blood and guts make up FAMILIAR, a gory counter part to WORM, the bloodless dramatic predecessor.

Richard: FAMILIAR took a long time, all of our shorts do because we write, finance and distribute the films our selves. We have never earned a grant or been blessed with rich relatives (although relatives have surely helped us beyond words!) So our films taking a long time really makes us consider each project, each cast or crew member and finally how long we push our films into the world. These aren’t cheap, throw away short films, these are our first films and they mean everything to us. FAMILIAR took atleast a year to cast, to find locations and to develop the special FX with the Butcher. We also had to work our day jobs to raise the budget, infact everything we have created is always on Evenings and Weekends, which makes the prospects of doing this full time a dream we strive for every day because with that amount of time we know we are capable of great things cinematically.

Richard: Luckily FAMILIAR was much easier to make than our previous film WORM and WORM is the reason why. We spent alot of money and learned alot of lessons on WORM which allowed FAMILIAR to come together in a much more streamlined way. Due to the fact that we spent the time and money to make WORM great we were able to attract high level cast and crew who were excited to work with us on FAMILIAR. Due to the fact that we had established relationships on WORM with certain cast and crew we knew who we could rely on when it came to FAMILIAR. Every film makes the next one easier but because the next film should be better the difference in negligible. No film is easy and every film you do makes that all the more clear.

Richard: I watch ALIEN, TAXI DRIVER, GOOD FELLAS and TEXAS CHAINSAW MASSACRE the most. I’ve watched them since I was kid and will do so until I’m an old man because every time I watch them I see more and learn more. These films never age or diminish but grow stronger with each viewing.

Richard: We are close to completing a new short film HEIR which will hopefully be on the Festival circuit this Summer/Fall. It’s something very different and I have a feeling will cause some great discussion once it begins to be seen. Aside from that we are trying to get our feature film WORM made and I am personally trying to write much more these days to get all of the ideas I have out of my brain and into the world!